The scariest escape riddles in the world 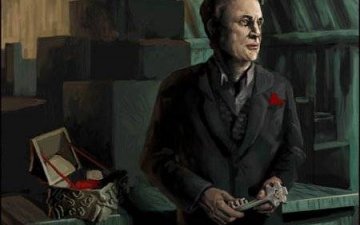 If you need something that can raise your adrenaline in seconds, if you desire to test your psyche, then maybe you are ready to try one of the very popular lately escape rooms  with scary stories.

What is the character of the scary escape riddles?

The rules of the games are the same as in any escape room, the only difference is that the stories are horrors or mysteries, and actors are involved in many of the riddles for greater realism.

Are you really ready to try this adventure?  Let‘s see!

We have prepared a short list of the scariest escape riddles in the world that will make your hair bristle.

The mysterious disappearance of Randolph Carter

The Police assigns to you and your team the task to find out what happened to prof. Randolph Carter. He is an occult scientist who has mysteriously disappeared from the face of the earth a few months ago.

According to informants, the professor was last seen entering the home of prof. Orinich – a famous paranormal scientist who is suspected by the Police to have committed bloody crimes. In order to understand what has happened, your team has to go in Orinich’s home to collect evidence and have to do so while the professor is in the house.

The professor is a crazy genius, who has set up many traps all over the house, so at any moment you can be caught into one of them and never be able to go out of it. That is why you have to be very quick, quiet and manage to collect the required evidence, without making the professor suspicious – and this is really, really difficult.

You are trapped in the shop of a crazy serial killer who kills people with a chopper. The only way to save yourself is to manage to outsmart him by accepting his challenge and beating him in his game.

You have to use all your cunning and creativity if you want to survive and get out alive from the killer’s hands.

This is one of the scariest escape riddles in the world that will take you to two different escape rooms. To get to the Sheriff’s office you first have to go through the laboratory. The game is similar to computer games and it has 2 levels that you have to pass in order to survive.

Quite by accident, you and your friends find yourselves in a small town in Texas, but soon enough you realize that there is something wrong. There is a famous scientist living in this town, who makes ominous experiments with humans, turning them into zombies.

The government is expected soon enough to put the town under quarantine, in order to limit the infection, so if you want to save yourselves, you have to act very quickly and escape the town. To do so, you have to enter the scientist’s laboratory, find his researches, and take them for proof with yourself.

You have succeeded in surviving in the laboratory of the scientist, and the zombies haven’t taken you, so you go to the sheriff’s office to look for help. The sheriff tells you to wait in his office and goes out for a while, time is running but he doesn’t come back. With every minute passed you become more aware that the sheriff is working with the scientist, and if you want to stay alive, you have to get out of there very quickly. Unfortunately, the zombies are already after you, so you have to find very quickly a way to deal with all those, who are trying to kill you. Your colleagues from the FBI have disappeared while performing an operative task at the home of the famous psychiatrist Dr. Hannibal Lecter. There is a rumor spreading in the Administration of FBI that the doctor is a cannibal, so you are very worried that soon your colleagues will be cooked and served as dinner at one of the gatherings of Hannibal.

In order to prevent this, you have to enter the house of the maniac-cannibal and save your colleagues. But you don’t have the slightest idea of what the clever and sadistic Dr. Lecter has prepared. You have to concentrate all your will and courage not only to survive, but to keep your sanity if you wish to get out of there.

You work in „Major Crimes” Department and you are on the trail of a sinister serial killer. The evidence that you have collected so far lead to your former colleague.

Is he really guilty or has anyone insinuated the evidence? Your team has to enter his house to find out the truth. But as soon you go into his office, the door closes and you have to fight for your life if you don’t want to be his next victims.

The Red laboratory of Dr. Blake

You are in the laboratory of a ruthless scientist, who performs terrible experiments with humans. You have 60 minutes to find a way out of the laboratory if you want to live.

Before entering the laboratory, detective Kettering has warned you that along with the terrible secrets there you will also encounter Dr. Blake’s ghost. Will you accept the challenge to enter the laboratory, where the ghost of the cruel doctor awaits you? Do you have enough courage to try to solve the riddles scattered throughout the lab, and to save yourself from the scary ghost? This will be a game of life and death, in which only the bravest will survive.

You are a friend of a missing student, practicing at the local psychiatric hospital in the small town Barowil. You haven’t heard from your friend for a few weeks,  and the staff of the hospital has informed you that your friend has taken some documents and has gone in an unknown direction. By refusing to believe the words of the administration of the hospital, you decide to undertake your own investigation.

To do so, however, you have to enter the psychiatry, and there are terrifying things waiting for you – from psychotropic substances causing hallucinations, to the hospital’s dangerous patients who have lost their human appearance a long time ago. The portal to the other side opens exactly in this house! You are chosen to achieve what the Warren spouses have failed to do. You have to find the missing girl and perform exorcism within only 60 minutes…

The Warren family were previously hired by the Thompson family to find their missing daughter Valery. She was adopted by the family years ago and then disappeared mysteriously. Since then, the Thompson family has been looking for her without result. Even more stranger is that all firstborn children of the families living near Warren, have also disappeared.

It turns out that in the Warren’s house lives an evil demon who steals children and you have to stop him. Will you manage to deal with this complex and strange task or the demon will win again?

The „Warren Spouses” has all the right to be ranked as one of the top most terrifying escape riddles in the world, because it involves actors who make the situations more intense to the point that the hair of the players really bristles from the horror.

One pleasant afternoon you receive a letter saying:

„Dear Sir, I have to inform you that you are the only heir of Mr. Claus, who has left you his house. To take advantage of your inheritance, you have to show up immediately at the address, specified in the will and to take possession of the property.

P.S. I AM BEGGING YOU, FOR GOD‘S SAKE, do not enter the house alone, but take three friend with you. And be very careful … she is watching you!

Will you be brave enough to take possession of your property? If your blood hasn’t frozen in your veins, do enter in one of the scariest escape riddles and…. May God have mercy on your soul!