The most intricate escape mysteries in the world 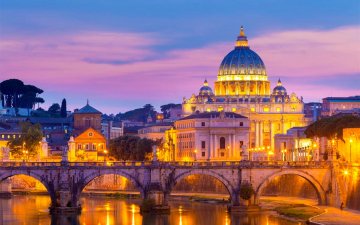 The popularity of escape rooms across the globe is enormous, and each player chooses alone what kind of mystery he or she is going to unravel. This is one of the reasons why it is difficult to produce an accurate ranking of the most interesting; most popular or most intricate mysteries that the various puzzle rooms in the world can offer us.

That's why we are not able to give you a definite and accurate list. However, we can offer you to take a look at our top favorites.

The year is 1989, and there is a strong feud between Italy and San Marino which can turn into a terrible international conflict that could hurt millions of innocent victims around the world. The players are a team of professionals who have to go to San Marino and prevent the murder of several people who are responsible for the peacekeeping in the world.

On the border between Italy and San Marino, however, the team was captured and locked in a room on the border. And time presses them because they need not only to escape from the interrogation room but also to reach the list of people targeted for killing and to save them.

The FBI has tracked the purchase of a biochemical bomb on the black market on the Internet. The trail leads to an apartment located somewhere in Hollywood. The apartment belongs to a middle-aged jeweler who has never been a suspect in any crime.

You and your friends are a team of special agents from the bomb deactivation department and you have to enter the apartment to find and defuse the bomb. There is no place for errors because the city is counting on you. At the beginning of the game, players are in an ancient library, and they have to find the secret entrance of a mysterious lab of a medieval alchemist to discover the four lost elements - Earth, Air, Fire and Water. They need to act very quickly and quietly before the alchemist returns.

For 60 minutes, players have to find the secret passage, get to the lab, discover, assemble and unfold the magical powers of the Philosopher's Stone if they want to save the world. And all this has to happen before the alchemist has returned.

A French Countess has lost her child in a tragic accident. In order to overcome the loss, the Countess began experimenting with seances in the hope of talking to her child again. Her seance room quickly gains popularity among the Paris Bohemians until one day the Countess suddenly disappears from the face of the Earth. There are rumors that she was drawn into the darkness by an evil spirit who lived in her seance room and drained her last drops of life.

Many ghost hunters have tried their luck in the abandoned house in order to try and save the countess, but no one has returned from this sinister place. Will the players be able to find the countess and return to the world of the living?

A team of reporters is sent to discover the temple of the oldest and most protected secret society on Earth. The keepers of the temple guard zealously the secrets of their order and do not allow anyone to approach their temple.

The reporters venture on their dangerous mission and find the coordinates of the temple. In their desire to reveal the mystery completely, they begin to dig and fall into a secret room in the temple, from which they must escape before the guardians return and discover them.

The spacecraft you are on has suffered from a space storm and you have only 60 minutes to prevent its complete destruction. The countdown has already begun, and the board computer that could save you is out of order. The only salvation for your crew is to try to manually maneuver the ship and return it to Earth. The goal of your team is to penetrate a bunker that has a secret Cold War project - a chemical lab. Your agency has received valuable information about the bunker from a repentant scientist who claims that the laboratory continues to exist and produce chemical weapons.

The agency has left you a package to help with the mission - an access code, a mirror, a computer virus, a sample container, radio receivers and a camera. The problem is that all of these things are in a military truck parked in the yard of the base from where you have to pick them up without raising any suspicion. Only after you pick up the things, the mission can begin.

In the 1950s a group of treasure hunters plundered the ancient Mayan settlements. Among the captured artifacts, the bandits encounter a statuette that, according to the legend of Napuche, has the power to turn stone into gold.

The treasurers begin to perform the ritual, but civil war breaks out and the ritual remains incomplete. Everything would have ended well if there were no consequences but unfortunately at the start of the ritual the treasure hunters have awakened the god Napuche, and now the Earth is threatened with destruction if you and your team fail to stop the return of the forces of the evil god and save the planet.

Special agents from a multinational corporation are hunting Lucy at the orders of their bosses, who are actually... vampires. You and your team have to save Lucy from the agents who want to kill her to pick up the hard drive that's in her. This disk stores all the information about the vampires around the world, which could lead to the destruction of all the children of Count Dracula.

You have to find Lucy, save the disk and once and for all put an end to the vampire existence. But that's not an easy task because the special agents are very smart and well trained... and your time is running out.

At first glance this mystery is a classic and of intermediate difficulty. But this is only at first sight because "Grandpa's will" is one of the most intricate escape mysteries in the world.

The rich entrepreneur Gerardo Assinelli dies and you have to find out where he has hidden the will if you want to take advantage of the inheritance. To do so, you have to enter the old man's home, overcome various obstacles, and grab the will before the police arrive. Because in this game you are the thieves. Once you've lost in a game of poker and you are drowning in debts, you and your team have to find a way to earn some quick money to get rid of the mafia. That's why you decide to rob a bank, but since you are not professional burglars, you will have to find a way to do it quickly and as real professionals would, otherwise you risk either to be found by the mafia or caught by the police and sent behind bars for many years.

Can you escape from an empty, white room? The key that can set you free is before you the entire time but you will not find it in time unless you deal with the complex puzzles and logical tasks that stand in your way to freedom.

An outbreak has turned almost the whole population of the Earth into living dead. You, along with a very small group, have survived and are desperately looking for the house of the late Professor Pelletier, who is alleged to have found a cure before he died.

You arrive at the house, but during the night you are all infected. You have nothing else left but to hurry up with the discovery of the cure if you want to save yourselves.

You and your friends are kidnapped by Edward Tandy - a serial killer-cannibal. He has created an intricate game at the home of his deceased mother.

The obstacles that his sick brain has invented are at every step, and you have to overcome them while he watches your every movement on the cameras he has put.

The worst nightmare of everyone in real life - you stay at the office and you cannot leave. You have an hour before the boss returns or you'll stay there for good.