Treat yourself with a great adventure! 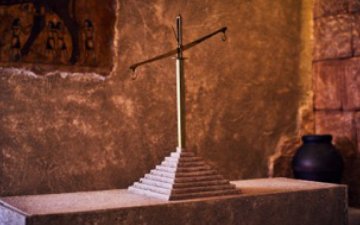 If you have been adventuring to an escape room before, then you already know - the experiences are supreme and can never be repeated in another room of mysteries!

If you were not however, then now the surprise will be complete for you. In both cases, it’s worth venturing an "expedition" in the two entertainment game rooms - "Egypt" and "Hacker" - in Aparthotel Lucky Bansko in, of course, Bansko!

For those who don’t know - they are called puzzle rooms where you will be involved in an action story that could be from many different eras. Modern technology can completely recreate a realistic environment.

In the room "Egypt" you will enter an Egyptian pyramid, you will be surrounded by ancient secrets and mysteries that need to be solved in order to find the exit and escape. You will be locked for 1 hour during which you will need to find the right solution to the puzzle.

Do not be scared that you will be locked - it's fun and there's nothing scary at all. Operators are watching you constantly with cameras, and if for some reason you decide to leave early, the doors will be open immediately.

Played by a team - from two to six people can join - like family, friends or colleagues.

Here we should note that the room "Egypt" is also suitable for younger children - from 6 to 12 years, of course, with adults to watch over them. It is the first of its kind in the country. The room "Hacker" is for more than 8-year-olds, as well as adults.

You do not need expertise in any area or special skills, or physical strength.

Everything is by logical thought and observation - to address the detail and to understand properly the hints to order the "puzzle" and finally reach success. Orientation in time and space is of great benefit.

You can participate by signing up in advance on the website of the Escape rooms in aparthotel Lucky Bansko. The organizers advise that if you wish to reserve a specific weekend then it’s best book it one or two weeks in advance.

You also should come to the room 15 minutes before the start of the game. Each participant will then receive a briefing on the rules they must follow, they would be able to ask anything they want to know, and then can use the time also for WC.

It’s important to know before signing up that pregnant women cannot take part in this, nor people with claustrophobia, cardiovascular diseases and others similar. Also, participants are not allowed to disclose details of the plot and reveal answers to the puzzles because they are a commercial secret.

The mysterious escape rooms in Lucky Bansko Aparthotel can be easily found - just go to the hotel and you will be quickly navigated.

By the way, on Monday, Tuesday and Wednesday there is a 20% discount: https://escapebansko.bg/en/rooms.html

So what do you choose - one of these days or book a whole weekend?